LORIENT DELEGATION VISIT TO GALWAY HAILED AS A “GREAT SUCCESS”

The visit of the Lorient delegation to Galway has been hailed as a “great success” that will help to further foster and grow the connections between the twinned cities of Galway and Lorient. That was according to Mayor of Lorient, Fabrice Loher, who also thanked the people of Galway for their immense hospitality during the visit.

Mayor Loher led an eight person delegation from Lorient who had travelled to Galway as part of the efforts to further enhance the academic, commercial and cultural links between the two regions. This followed on from a visit from a Galway delegation to Lorient in March.

During the course of their visit to Galway, the Lorient delegation held a range of meetings with a number of key organisations. These included Galway Chamber, Galway Technology Centre, Portershed, WestBIC, Údarás na Gaeltachta, Galway Harbour, NUI Galway and Atlantic Technological University (ATU). 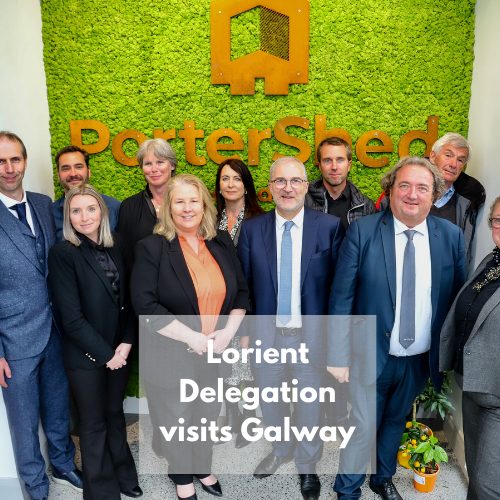 The visit culminated in an official dinner, hosted by Mayor of Galway Colette Connolly in honour of the Lorient delegation.

Speaking following the visit, Mayor Loher said, “We are delighted that this trip was a great success and that we  have had the opportunity to further strengthen the ties between Lorient and Galway. We were keen to use the opportunity provided by this trip to build further connections on many levels between our cities and I think that is exactly what we were able to do during this visit. I would like to thank the people of Galway for their superb hospitality, as well as all those who took the time to meet with us and receive us for this visit. It was a fascinating trip and I hope there will now be many more opportunities for engagement between our cities and our people in the future,” he said.

Mayor Colette Connolly said she was delighted that the Lorient delegation including Mayor Loher enjoyed their first ever trip to Galway City - twinned with Lorient since 1975. With similar populations, both are coastal and port cities with Tourism as a central economic driver. The designation of Galway as a  bi-lingual city in 2016 and how that translates to the revival of the Breton language is just one possible future area of co-operation that can be pursued together with possible internships in the hospitality sector.

“We were honoured to host this high level delegation from Lorient and that we had the opportunity to showcase the many different faces of Galway,” said Aengus Burns, President of Galway Chamber. “Over the course of their visit we were able to highlight the dynamic nature of Galway and what it has to offer from a business, tourism, academic and cultural viewpoint. This was a great opportunity to promote Galway and given the connection that these trips have helped to re-establish, hopefully it will lead to an ongoing level of partnership on multiple levels between our two cities and regions,” he concluded.