For the first time in history, Galway and the wider region will be represented by two seats on the Chambers Ireland Board of Directors. This follows recent election success with Galway Chamber CEO Kenny Deery elected as Chair of the Chambers Ireland Executive’s Forum and elevated to the board.

Pat Piggott, Board Member of Galway Chamber and Branch Manager of AIB, Tuam Road has also been re-elected to the Board. He has been a Board Member of Chambers Ireland for the past two years. 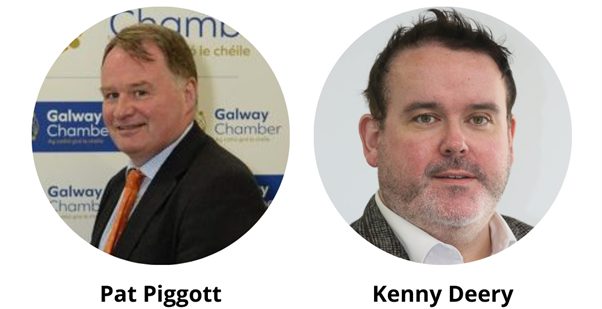 Chambers Ireland is Ireland’s largest business organisation with a network of Chambers of Commerce in every major town and region in the country. The board consists of 16 individuals representing chambers from around Ireland, and is the organisation’s governing body. Its functions are to provide strategic leadership, oversee the activities of the staff and volunteer structures at a national level.

In his role as Chair of the Chambers Ireland Executive’s Forum, Mr. Deery will head up the structure within Chambers Ireland that addresses issues of concern to its members and advises the board on issues affecting local chambers around the country.

Kenny Deery, commented, “The election of Pat and I to the Chambers Ireland Board brings a western regional perspective to dialogue and decisions. We look forward to representing Galway, and the wider region, in facilitating the growth and development of the Irish chamber network, and enabling the chambers to effectively promote the long term development of their locality on behalf of their members.”

Kenny is a native of Achill, in County Mayo, and has almost 20 years experience in the Retail Banking sector and before taking up the role as CEO of Galway Chamber, had served as Regional Engagement Manager for AIB in Galway, serving both city and county.

Pat is a native of Galway and has been working with AIB in Galway for the last 25 years. He is currently Branch Manager of AIB Tuam Road, Galway and Hub Manager to AIB Tuam and AIB Athenry.